Physics is the science of matter and energy and of interactions between the two. The traditional fields of physics are sound, optics, mechanics, thermodynamics, electromagnetism, and forces. The modern fields are atomic and nuclear physics, cryogenics, quantum physics, particle physics, plasma physics, and relativity. In physics so far we've learned about units of measurements, metric prefixes, sound waves, and newton laws. We also learn about and discuss current events in science. In physics class we do a lot of labs and interactive games and presentations so we can experience real life examples of whatever we're learning.

For our drone project we were put into groups and we built our own nano drones. Then we learned how to fly them by testing what settings made the drone fly the smoothest. We tested different amounts of roll pitch and yaw. Then we tried to design a mission that we could have other people do when they came to our exhibition, like a game or an obstacle course. That didn't really work because the software we were going to use with the drones didn't work on the computer so we had to use an app on our phones instead and when using the app it was really hard to control the drone. So for exhibition we made a video of us doing our obstacle course instead of letting people actually fly them. In our exhibition we also explained all the physics we learned like SOCATOAH and triangle math and the laws of motion.
The physics we learned during the project was triangle math and how to calculate forces and the missing forces. Then the process we went through for our exhibition was a lot. Everyone had a different job, mine was Engineer lead which means I drew to scale drawings of our nano drone. Other people in my group were the graphic designer, drone lead, and the documentarian. They did things like design posters and passports, make sure the drone was okay and fly the drone, and videotape/interview other members of the group.
I'm most proud of our original design for our obstacle course with the volleyball net, and the hula hoops. Because I thought it would've been really cool if we had actually had been able to have people try to fly our drones through the course. Something I would change would be the role I chose in my group because I didn't like having to draw to scale drawings of the nano drone because it was so tiny and it was hard to get all the details exactly right, and I feel like I would've had more fun doing something like the documentarian or graphic designer.
Drone Team Weebly Link

For our Nuclear Physics project we had to explain things like nuclear fission, fusion, the history of nuclear energy, and current nuclear energy happenings. Ilysah and I chose to make a children's book. We explained nuclear fusion and nuclear fission in simple terms through a picture book. Each page had 1 sentence, and a cartoon picture. The book had 3 parts, Nuclear Fusion and Fission, The History of Nuclear Energy, and Radiation. Then we presented to 10th graders our projects and explained it to them, and they gave us feedback.
The physics concepts we learned during this project were: Nuclear Fission, Nuclear Fusion, Radiation, Alpha, Beta, Gamma, and the History of Physics.
Nuclear Fission: Nuclear fission is the process of a rouge neutron hits a nucleus and the nucleus splits apart into two lighter masses and the split gives off energy.
Nuclear Fusion: When two different elements like deuterium and tritium combine together then split off to make helium and one neutron. When they split it also gives off energy.
​ Radiation: Radiation are types of electromagnetic waves, some like ionizing radiation can be harmful and others like non ionizing radiation aren't harmful to humans. There are also three different types of radiation, alpha, beta, and gamma.
Alpha Radiation: is the slowest and least dangerous of the three types, alpha radiation can be blocked by paper or skin.
Beta Radiation: is slightly stronger then alpha radiation, it can be blocked by wood or plastic.
Gamma Radiation: Gamma is the strongest and most dangerous of the three. Gamma radiation is what causes cancer, gamma radiation needs to be blocked by a lot of water, or many layers of lead and concrete.
The history of physics: We learned about when Nuclear energy/plants were invited, how nuclear reactors work, and we also learned about nuclear accidents like Chernobyl and what went wrong inside the plant to cause the nuclear meltdown and the deaths of hundreds of people.
During this project I learned a lot of really cool and interesting facts about radiation like that smokers get more radiation then astronauts which is crazy. I also learned how many milirems of radiation I receive per year.

I'm most proud of the way my book looks because Ilysah and I worked really hard on making it look good, we made the pages, then screenshotted the pages and put them in a google doc, then we printed and cut the pages, then laminated the pages, then hole punched all the pages, then tied them together with yarn. So it was a lot of work and I'm really happy with the final product and the images we found for each page. Something I wish I could change or revise for this project would be since we presented to the 10th graders twice I think we should've presented our ideas to the 10th graders the first time and gotten critique and then executed our ideas and then gone back and shown them our final products.

For this project we learned about the particles that make up particles, we also learned about dimensions, black holes and all the crazy stuff like that. We looked at the different families that were in the subatomic particles like the quarks, leptons, and the force carriers. We also learned about the theoretical and the hypothetical particles. We studied each subatomic particle and what each one did, their mass, how long they stayed alive and things like that.
We learned about all the different dimensions and what time did in each one we also went to watch Alice through the looking glass to help us visualize the different dimensions. After we studied each sub atomic particle we decided which one related the most to us. I decided that I was like the photon because the photon is the particle that makes up light and the photon is very controversial because scientists cant agree on if it is a particle or a wave, this relates to me because I think I have two very different sides and sometimes I cant decide which one I am. I'm also like the proton because it travels at the speed of light and people are always telling me I talk insanely fast. So we made particle plushies. I made a photon and I decided to make it look like a cloud because its light. Then I decided to make a W boson and a gluon because they're in the force carrier family and I wanted extra credit. 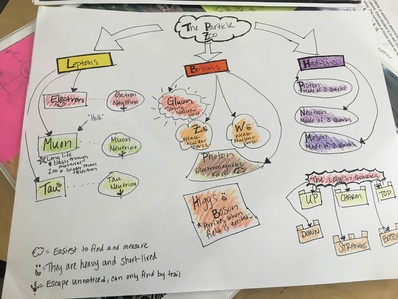 I'm most proud of my first particle, the photon because I think it came out the best of my 3 particles. The stitching is neat, its fluffy and I love the googly eyes. I'm also really proud of my trading card because I think I related my particle back to me really well and I think I put a lot of good information on it. Something I would change would be to have practiced sewing more before I started making my plushies because I sewed the back of the plushie to the front accidentally a couple of times. I also wish I wouldn't have been in such a rush to make my 2nd and 3rd particle plushies. Because I think if I had more time I could've made them higher quality and with more creativity and imagination. And I think my W boson might have been an actual circle if I practiced more. 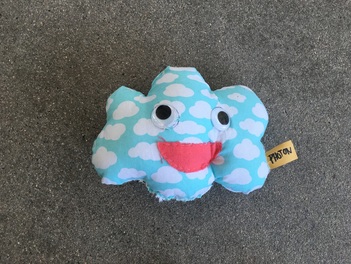 This is my first particle plushie, its the photon particle or wave of light.

I think what it means to be curious in physics is to ask questions, or to wonder why things work the way they work, or if you change something will it still work the same way?
I have learned a lot about science throughout this year from doing my science current events because they challenged me to think about how these new inventions or discoveries would effect not only me but all of the world as well. 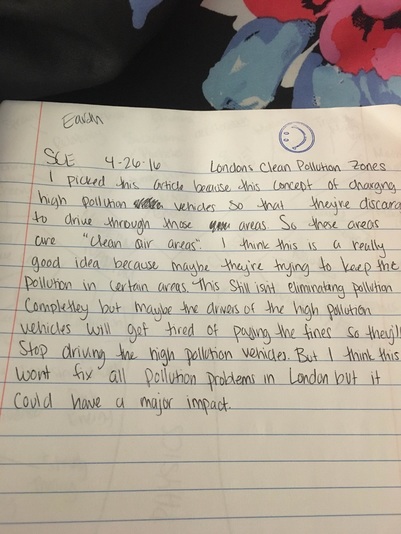