And then to solve for the maximum area we just made an x y table and plugged in 0-4 into the equation y=16-x^2  and I got 4 points (1,15)
(2,12)
(3,7)
(4,0)
Once we plotted the points on the graph I drew rectangles coming from each point. And then multiplied x times y to find the area. The biggest area I got from a whole number was 24 from 2x12. But then we also had to find the biggest area to the nearest tenth so we deduced that the biggest area would be in between 2 and 3 because for 3x7 the area is 21. So we tried all of the decimals in between and we found that when x=2.3 y=10.71 and A=25.704. Then we were also supposed to also find the largest area to the nearest hundredth but we didn't want to guess and check for the rest of our life so we came up with a formula to solve for what the area is for x to make things go faster.
We know that the formula for area is A=xy and we know what y is because of the original formula y=16-x^2  so we just substituted. A=x(16-x^2) and then when you distribute the x, A=16x-x^3. Final Answer: with that formula we found that x=2.1 gives you the largest area.
For the perimeter we skipped the step of guessing and checking, we went straight to trying to generalize the function. We know that P=2(x+y), and we know ​y=16-x^2 so we substituted again, just like we did with area and got P=2(x+16-x^2), distribute the 2, P=2x+32-2x^2. So this time instead of making an x y table we made an x P table, which keeps y unknown. We used 0-4 again to see the perimeter of each of the rectangles we already had. We deduced that the highest perimeter was in between 1 and 0 because those both had a perimeter of 32. We tried all of the numbers to the nearest tenth from 0-1 and found that when x=.5 the rectangle had the largest perimeter. P=32.5. 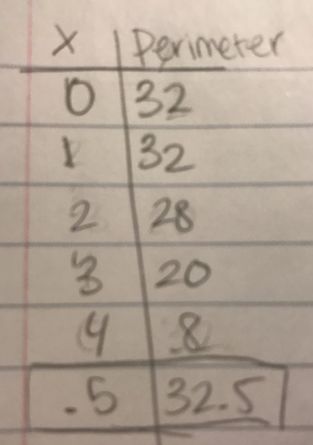 On Tuesday November 28th to prepare for the group test my group tried a variation of the same problem we had been practicing, we just used the function y=25-x^2. And we were able to successfully solve for the maximum perimeter and area and come up with both generalized functions.
During the actual group quiz I think my group worked pretty well together but only Thalia and I were actively contributing to the problem, like trying to solve it. Sabrina was asking questions and trying to understand and Anthony was just kind of watching, he didn't ask very many questions or contribute to trying to help solve the problem much. I think the reason we weren't able to finish was because not all of us were contributing so I think that slowed us down.
My ability to understand the individual quiz was good, I got a perfect score, and I felt like I knew how to do each problem with confidence.
Overall the experience was a little frustrating because I felt like it was kind of hard to work with my group mates it kind of felt like I was one of the people doing all of the work which is hard because then I know that if the rest of my group mates just copy what I wrote on my paper onto their paper its not the same thing as all of us contributing and learning and understanding it. It's also frustrating because we were being graded on group work and I can't force my group mates to actively participate. And I do think that if all of my group mates would've known how to solve the past 2 problems we did they could've helped more on the group quiz.

The part that pushed my thinking and I think I got the most out of was just making the connection of what we know to what we want to find out, like with the functions, knowing the area and perimeter functions and plugging what y was into them to be able to solve for x. If I were to give myself a grade on this unit I would say I should get an A because I participates/led all of my group discussions and I studied outside of school and understood how to solve the problems.