Height of the HTHCV Flagpole Problem

Problem Statement: In this problem we were asked to estimate the height of the flagpole without measuring it. We did this using similarity theorems and proportions, the main similarity theorems we used were Angle Angle (AA), Side Angle Side (SAS), and Side Side Side (SSS).
Process and Solution: When we launched this problem we went outside and looked at the flagpole and had to make an estimation for how tall it was. My initial guess for the height of the flagpole was between 20 and 35 feet. I guessed this because I tried to imagine how many times I could stack myself to reach the top of the flagpole.
During this section we talked a lot about similarity, similarity in my own words is: Similarity is when sides of a polygon are proportional or have the same scale factor and the angles for both polygons are the same. In other words similarity is two of the same shapes that are different sizes.
​
The Shadow Method:

The Shadow Method is the first method we used to try to estimate the height for the flagpole. We did this by comparing our shadow (as a person) to the shadow of the flagpole. These to triangles are similar because of the Angle, Angle Theorem: the angle at which the sun hits the object is the same on both the person and the flagpole, then the right angle they both have. So when we set up our triangles on paper they looked like the image below (left). Then we went and measured the height of a person, the persons shadow and the shadow of the flagpole. We plugged these values into our triangles (right). 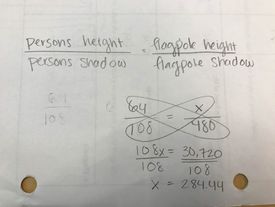 Then we set up a proportion with the measurements we had and solved for x. We got x=284.44 inches divided my 12=23.7 feet, rounded the flagpole's height=24 feet.
​
The Mirror Method: 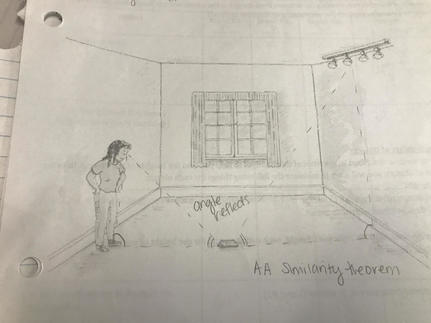 The Mirror Method was the second way we solved for the height of the flagpole, with the Mirror Method we estimated that the height of the flagpole was 22 feet. The way we do this is by looking into a mirror and then measuring the distances, doing that we're able to set up a proportion and solve for x which is the missing height of the flagpole. But first you have to prove that triangles are similar when you use this method. We used the Angle Angle Similarity Theorem (AA) which means that the triangles are similar because they have to angles that are equal, in the picture above you can see that the two angles reflecting off the mirror are the same and the two right angles are the same so that's how we know that these triangles are similar. Once we know they are similar we can use the Mirror Method. How it works: One person puts a mirror down in front of the object you want to find the height of then they step backwards or forwards until they can see the top of the object in the mirror, then we measure the height of the person, the distance from the person to the mirror and the distance from the object to the mirror. Once we have those variables we plug it into the diagram below (left) once we did all of our measurements and plugged them in our diagram looked like the picture below (right). 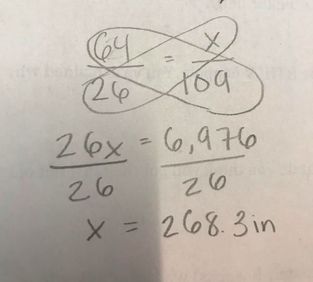 Then we plugged our answers into a proportion, then to solve for x we cross multiplied and solved for x. Then we had 268.3 inches, so we divided by 12 to get 22.3 feet, which was our final estimation for the flagpoles height using the Mirror Method.
​
The Clinometer Method: 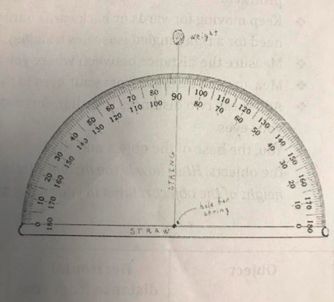 The Clinometer Method is the third and final way we used to solve for the height of the flagpole, with the CM we estimated that the height of the flagpole was 32.6 feet. This method was different from the other two because we only used one triangle instead of two. We used and Isosceles Triangle which is when there is one right angle which is 90 degrees and the two other angles are both 45 degrees. Which means that two of the lines have equal lengths. The diagram we used for this method is below. This method was the hardest to execute in real life because the clinometer is a protractor with a straw taped to the straight side of it and a string hanging from the middle of it. When we were getting our measurements one person had to look through the straw on the clinometer while making sure the angle of the clinometer was 45 degrees. So the person who was looking through the clinometer had to move back and forth to be able to see the top of the flagpole. Once they could do that we measured the distance from the person to the flagpole and added that to the distance from the persons feet to their eyes, we added these together because the 45 degree angle is from our eyes not from our feet so we had to add that to the base distance so it was more accurate. When we had our measurements we plugged them into the diagram we knew that OM was going to be equal to HO so what we got when we added the distance from person to flagpole and distance from feet to eyes was 392 inches, we divided by 12 to find the height of the flagpole in feet and we got 32.6 feet.
My best final estimation: 26.2 feet because this is the average of all three methods put together and it matches up with my original estimate (between 25-35 feet).
Problem Evaluation: I liked this problem a lot I think it was cool how every time we started a new method we got to go outside and actually do the method instead of just being given the calculations we got to go get our own calculations. The part that most pushed my thinking was being able to visualize the triangles that we drew on paper in real life and being able to make the connection between those two. Like with the clintometer method at first when Mr. Carter was explaining it I had no idea what he was talking about or how we could use that to measure how high the flagpole is, but once we went outside and actually did it, I started seeing the triangles.
​
Self Evaluation: If I were to grade myself I would give myself an A, I did all of the assignments, actively participated with my group and I really understood the questions on the similarity test, I was also able to help other people in my class or my group if they were struggling. I gave myself an A because I missed so much of the unit in the beginning.
Edits:
-Made pictures smaller
-Added pictures for the Shadow Method
-Made text wrap around picture
-Added spaces between sections
-Talked more about the similarity theorems
-Added how shaped are the same in similarity
-Fixed the pictures