Project Intro:
We wrote personal narratives, we focused on something that was important to us or something that happened to us. We focused on having a journey, strong description and dialogue (JDD) in each of our narratives. We did multiple workshops to help make each of these elements as strong as possible in our writing.
Our Project Launch:
This project launch was different than any other project launch I've ever had. The whole team was sitting in rows facing the front and we were about to finish a movie that we were watching when we heard banging on the door. Mrs. Soler came in, enraged. She was passing out blank pieces of paper on the first row of desks. Once she was done she went back past all the desks smacking the papers everywhere. While this was happening Dr. P pulled out a bright orange sweatband, put it on his head and began to run laps around the classroom, very calmly. Mrs. Soler took off her shoe and threw it at one of the student's head, he then threw it behind him into the rest of the students. Dr. P pulled out a whiffle ball and a bat and hit the ball back into the crowd of students. Then both Dr. P and Mrs. Soler stopped and told us to write descriptively about what had just happened.
After we had all written what we thought had happened we took a walking field trip up to the Von's shopping center. We were supposed to either interview someone or watch someone and write about their story. If we watched someone we had to describe them and come up with a back story based on what we had witnessed. Below is an image of what Sam and I wrote about our person we watched. 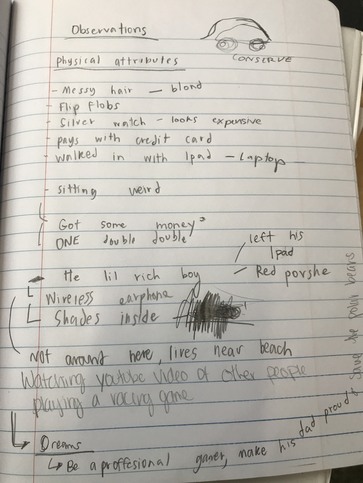 Baseline Writing Piece:
(Write: knowing what you now know about how to write a narrative, what would you change about this, and what would you keep the same?)
Staging "How I Won the Rights to the Streets of Memphis":
We read and analyzed a personal narrative written by a boy who "won the rights to the streets of Memphis" we separated his story into episodes or scenes and each group was assigned a scene and had to act it out in front of the class, what we pictured it was like from his writing. Looking back I think we did this because we wanted to show how easy it was to reenact what happened in someones story if it was detailed, descriptive and well written.
Initial Story Ideas:
The story idea that I wrote my baseline essay on what was I wrote my final narrative on so I didn't really brainstorm any other ideas.
Hero's Journey:
I didn't really use the Hero's Journey to structure my piece. All of the Hero's Journey didn't really apply to my piece, only about 3/4s of it did and what part of my piece that fit into the Hero's Journey was already in that structure. I don't really think it's helpful to look at the events in my life as "Hero's Journeys" because I'm not a hero and I suppose most stories to fit into that outline of a Hero's Journey but I don't think we should go around like "Okay now I'm entering the special world" because that's just weird. 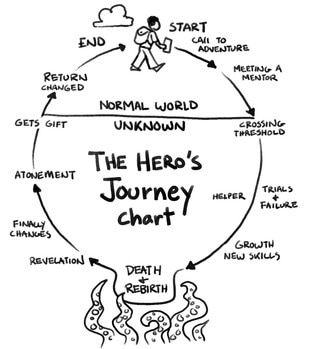 Shell Descriptions:
So we described shells in class for like 2 weeks, we would come in, look at a shell and describe it in our writing. Then we were supposed to apply that to our personal narratives. I think I applied it to one part of my narrative, but not that much just because it would've been very, very, very boring to spend even more time describing things in great detail, for me to write and for the people who are going to read my narrative to read. But I did apply that descriptiveness to one part of my narrative, the teddy bear and I think it turned out really well.
My Final Draft:
The process of developing this draft is quite a lot. We started with writing out baseline essays, which then a lot of people completely changed to write about something else but I kept my story the same. So it went from my baseline essay to my first "down draft", and then I added the specific detail about the teddy bear after doing the shell description.
My teddy bear description: I was looking at the teddy bear, I thought it might not be a bad addition to my collection. The teddy bear was a light brown, almost like a perfectly cooked chocolate cookie. It had glassy black eyes like olives and a red plaid bowtie that was about as big as two of my finders put together. When I felt the bear's fur I remember it feeling weird, like very very thin plastic, it didn't remind me of fur."
Then our first round of critique and I made more edits, with things like grammar and expanding on certain ideas I had suggested. Then we did the dialogue workshop and I focused on adding more dialogue in with my mom and I. And the last edits I made was to add the two memories of my whole family together, I did this because Dr. P said my family had no individuality, that I needed to add something to separate my family from the rest and to make the readers feel like they knew or could relate to my family.
Golden Moment from Exhibition:
A golden moment at exhibition was when Dr. P tried to end the exhibition and Ana wasn't having it. She wanted to read her story so she took the mike and read her story as we were all cleaning up. It was gold, because she just read it and didn't care that no one was really listening to her.​